I've been catching up on the Sweet Dreams blocks over the weekend as well as catching up on sleep. It was so nice this morning to sleep in and then just have a leisurely breakfast with no thoughts of work in my head at all!

I fussy cut flowers for both blocks, this is block 7.  I made a few mistakes with the direction of triangles and so it took twice as long as it should of with quite a bit of unpicking and re-doing, but its a gorgeous block now its done. 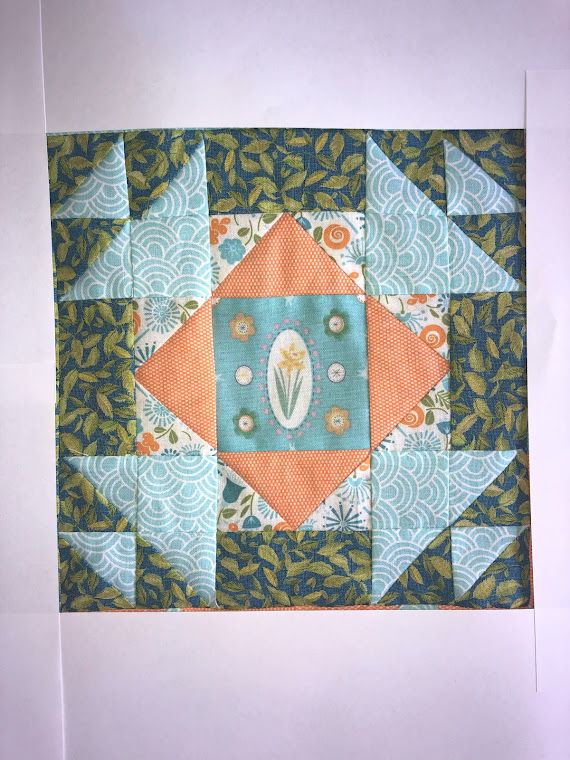 §Block 9 was simpler and quicker to sew. 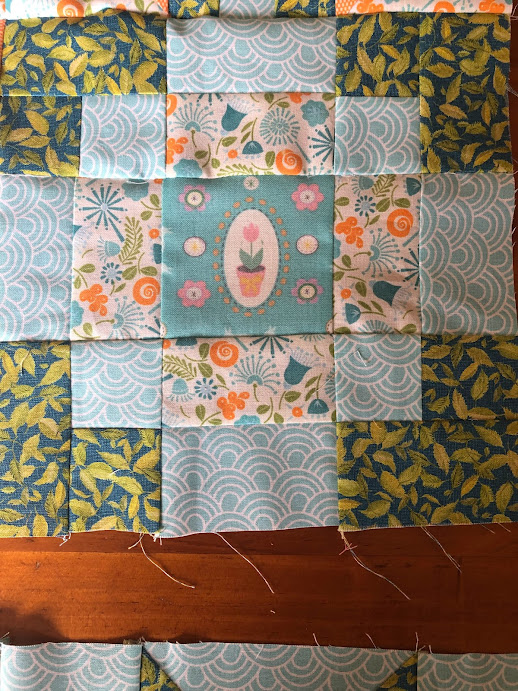 On Saturday I finally  hung my 'design wall' up in the lounge room and then had a lovely time rearranging the blocks throughout the day until I settled on this arrangement for the centre panel.  I added the first border and I'm quite happy with how its coming together. 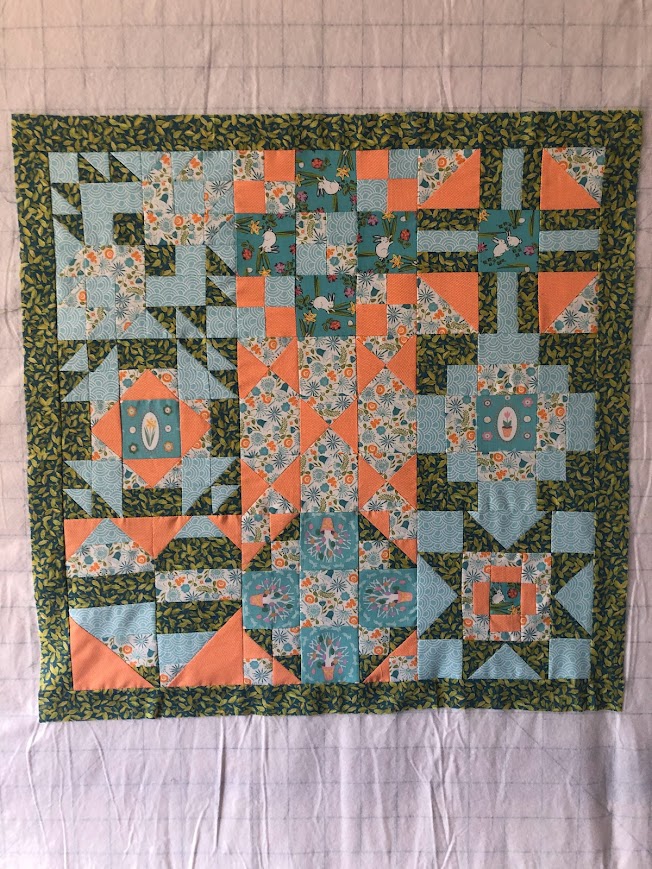 I opened my fat quarter package - its fabulous! I'll post some pics soon. I'm going to have lunch now and then catch up on MAFs lol!

I've been sitting here watching the last few minutes of the countdown go down to zero and now its official - I'm retired!

It's nine months earlier than planned when I started this blog in December of 2017 with a goal of retiring in five years - 'and so it begins'.

This last week didn't really go as planned. DH had a bike accident and ended up having surgery - he's doing OK, just has a lot of sitting about ahead of him for the next few weeks while he recovers. So I ended up only working three days this week.

I had wonderful farewell with a few tears, lots of laughs and sharing of memories. I've been given a VERY generous Spotlight gift voucher to spend on fabric - they know me well lol!

We're having a celebration dinner tonight - theres a roast dinner in the oven - and I'm pretty confident of a good nights sleep ahead.

And so a new chapter begins in the morning.  I'm planning on spending the day sewing. I have fabric parcels to open, Sweet Dreams to get caught up on and so much I want to do!

" A wise woman once said 'I'm Outta Here!' and she lived happily ever after." 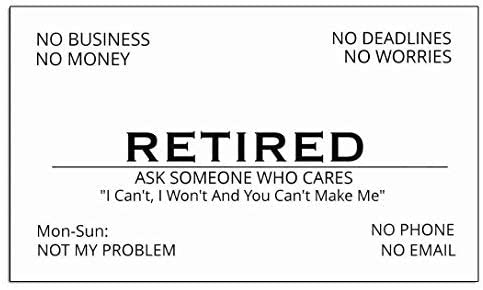 Well this is the last Monday morning I will be getting ready for work. I have just five days to work until that counter ticks over to zero and then I'm retired!

I've hardly sewn since I last posted, just busy with finalising work projects and too tired to do much else when I get home. But I did finish one more Sweet Dreams block - #8 and have a few more cut out ready to go. 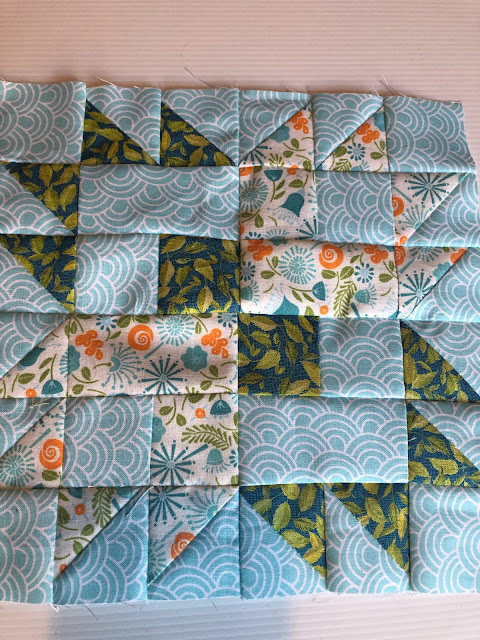 I'm looking forward to next week when I can just rest, relax and start decompressing. I have ordered more comic book boards and I've also put in an order for some gorgeous fat quarter bundles that were on sale - a retirement present to myself!

At work I'll be packing up the last of my office furnishings and bringing it home each day and saying my goodbyes. My farewell will be via a Teams meeting and then its just handing in my keys on Friday.  I'm just going to focus on enjoying my last week and catching up with old work colleagues - the final countdown is here!

"What do you call a person who is happy on Mondays? Retired!"

This months colour for the scrap challenge is yellow and gold. Yellow is such a cheerful colour to work with and I have quite a lot of yellows in my stash, will probably find some more scraps to add.  I've made a few more blocks in the Carolina Chain pattern: 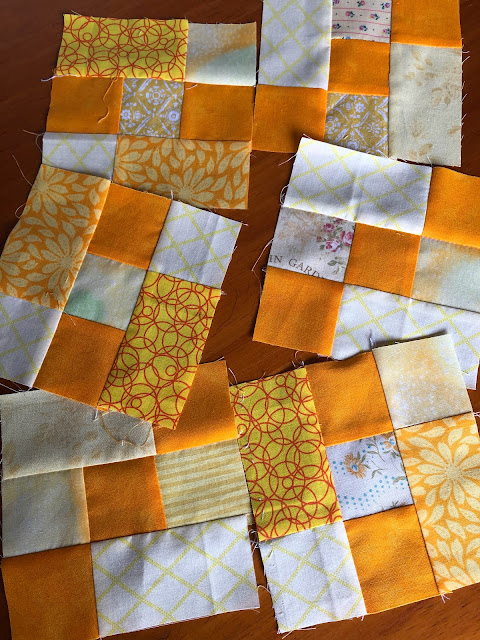 I'm also plodding along with Sweet Dreams, with three blocks cut out ready to sew which will complete the nine-block centre for the quilt. 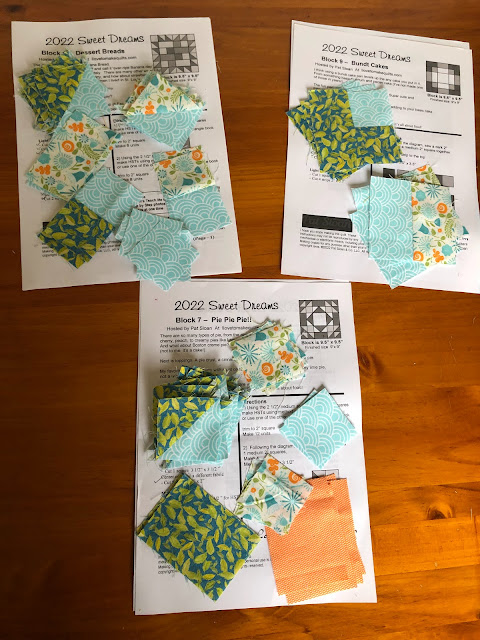 Linking up with Soscrappy & OhScrap!

I started this blog to track my finances as I worked towards retiring in 5 years. I retired 9 months early in 2022 and now I blog about life in retirement - quilting, sewing, gardening, travelling. I enjoy finding similar blogs so feel free to comment & thanks for reading.