Blue skies & a mistake in my favour! 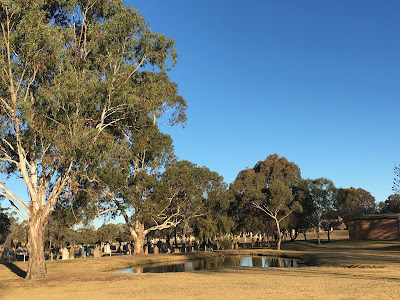 Yesterday was a beautiful day here! After several weeks of skies filled with red dust & smoke from the bushfires, we had a beautiful bright blue sky, the gale force winds of the night before dropped and the temperatures went down.

It was so nice to go outside the house and not breathe dusty smoky air, and to finally open the windows. Everyone was enjoying being outside yesterday!

And it really does make you appreciate seeing the sky each day, something I've just taken for granted all my life.

Usually bushfire season in Australia is at its worst in January. This year it started in early November and its been very bad. The pollution levels have been very high which we've never had here before as we live in the country, and away from the main fire areas, but the wind is just blowing our way, along with the red dust from the drought affected areas. This morning the sky is tinged with red dust again, but no smoke thank goodness.

I had a very pleasant surprise when I checked my pay last night - and $800 extra payment! Apparently I have been underpaid on one of my work allowances for the last 3 years. So nice to have that extra this month while we're trying to reach our end of year goals! As it was extra it went straight off the mortgage.

Welcome & thanks for visiting!

In 2018 I set a goal to retire in 5 years & this blog has tracked my progress. In early 2022 I'll retire to spend my time quilting, sewing, reading & gardening, and maybe one day when Covid is over also travelling! Jan. Australian.
Countdown to retirement!Countdown