I've been in a bit of a down mood this week. Its been interesting to see just how quickly the stress and tiredness have come back after my time off work. At just five months back I have to say I'm definitely feeling too tired to do much else than work. So, it hasn't taken long. I'm off work at the moment as I've been sick the last few days and I am no longer willing to 'soldier on' as I used to and just keep going to work.

I just want to be in a position to enjoy my days, cook, shop, clean, read and generally live a happy, frugal retired life. I can spend much less when I have more time. But at the moment I need to keep going.

However I may not have to wait as long as I originally planned.

Last night the government announced the budget and the area I work in has had its budget slashed by approximately $300 million. Its also been rumoured that over 2000 jobs will go. The 'talk' up till now has been that my job is safe and not up for being cut but on Friday last week I heard that that is no longer the case. How to get rid of us is now on the discussion table.

To be honest I am quite relieved, and I just hope when the time comes that I get a redundancy as many of my fine colleagues have in the last few years. I no longer have any 'fight' left in me. This government is determined to privatise public services and destroy education opportunities and support for the disadvantaged in our community. It is absolutely horrendous to see the destruction of services that has happened over the life of this mongrel government. And as I work in health, education and social support it has become increasingly difficult to actually help those that I am meant to serve.  I expect that this will not actually happen for at least 12-18 months - delayed till after our state election as it won't look good to sack several thousand more workers in the run up to elections.

So, if and when that happens I will  just work for myself part time. I could leave now and be fully employed in a matter of weeks but I don't want to walk away from could be a good payout. I'll keep working my side gig - had an offer or more work again last night - while poking along at the day job and trying not to get worn out. I am so looking forward to the day when I can do less and blog about a more frugal, simple lifestyle.

I really appreciate your comments & enjoy these blog 'conversations'. I read them all and mostly reply here. I enjoy finding other bloggers with similar interests. Thanks for visiting :)

I started this blog to track my finances as I worked towards retiring in 5 years. I retired 9 months early in 2022 and now I blog about life in retirement - quilting, sewing, gardening, travelling. I enjoy finding similar blogs so feel free to comment & thanks for reading. 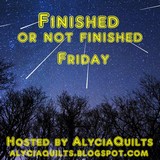